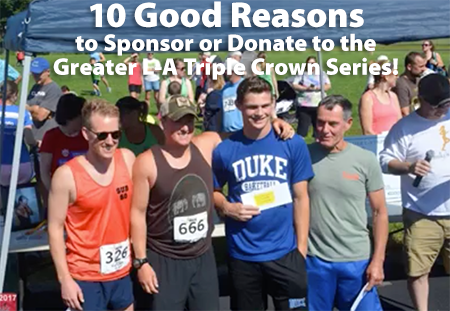 The past season of the Triple Crown 5K Series was a huge success. We had almost 2,000 runners and walkers participate in the Triple Crown Race Series. We also had nearly 200 children take part in the Auburn Fire Fighters Local 797 Kids’ Fun Runs (held just prior to the start of the 5K races). This past season, the Bridge Run Foundation generously paid the race fee for all children 14 and younger! We were thrilled to see many youngsters participate in the full-length 5K races, often with their families. In the end, we raised nearly forty thousand dollars for our three charities.

Hosting a race series of this caliber would not be possible without the partnership and support of our sponsors. In return for their valuable support, we offer sponsors superior promotional opportunities for their businesses. Each year we print more than a thousand t-shirts with sponsor logos/names on the back – a virtual walking billboard for your business! We also print race postcards, posters, and engage in extensive online advertising efforts – all promoting our sponsors.

In its 12th year, the 2020 Triple Crown will take place throughout the summer in three locations in Lewiston-Auburn:

We hope that you will consider partnering with us as a sponsor as we present this series of fun, festive, and health-minded community events. For questions regarding sponsorship, please contact Erin Dunbar at dunbarerin@ymail.com.